Pesonal note! Here are 3 generations of my family at the Climate March in Toronto.  Great day, very inspiring. 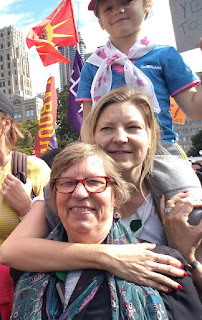 By Laurie Goering.  LONDON, Sept 25 (Thomson Reuters Foundation) -
Melting of the world's glaciers and warming of its oceans are fuelling rising seas, fiercer storms, worsening water shortages and other risks that could force millions from their homes or leave them hungrier and poorer, scientists warned on Wednesday.Some of the threat could be averted both by rapidly slashing climate-heating emissions and speeding up efforts to adapt to the coming changes, using everything from sea-walls to early warning systems for extreme weather, they said.. But "we may be losing this race" to put protective measures in place in time, warned Hoesung Lee, chair of the Intergovernmental Panel on Climate Change (IPCC), a U.N.-backed panel of climate scientists. Coastal communities, particularly in the tropics and on low-lying islands, as well as people dependent on glacier melt for their water are most at risk, scientists said in a new report outlining how climate change could affect oceans and ice.The report, crafted by more than 100 scientists from 36 countries, said 680 million people live in low-lying coastal zones worldwide, a figure expected to rise to 1 billion by 2050.As sea level rises - driven increasingly by accelerating melting of the world's ice sheets as well as by ocean warming - those people will face more frequent flooding and harsher storms that drive powerful seawater surges inland, the scientists said.Some areas that once flooded only every 100 years or so - particularly on low-lying islands that are home to 65 million people - could face annual flooding by 2050, they warned, unless strong protective measures are put in place."This could create very vexing questions about the habitability of some areas of the world," said Debra Roberts, a South African scientist and a co-author of the report.
No comments: Links to this post

From Indonesia to Gabon, countries turn to nature to cut climate risks

From Indonesia to Gabon, countries turn to nature to cut ...


By Laurie Goering
NEW YORK, Sept 23 (Thomson Reuters Foundation) - New York City gets its drinking water from a network of more than 20 reservoirs and lakes further north in New York state, some more than 100 miles (161 km) away.
Because the land surrounding the reservoirs is carefully protected and managed, the water piped in is pure enough so that the city is one of the few in the United States that does not need to filter its drinking water, officials say.
Creating more "nature-based solutions" like this - planting coastal mangroves or protecting coral reefs to slow storm surges - is a relatively cheap and effective way to curb rising climate change risks, resilience experts told a meeting in New York.
It could also help address other threats, including accelerating losses of plant and animal species not just from climate change but also expanding agriculture, forest-felling and mining, to meet the needs of a rising human population.
"There is a wealth of evidence ... that if we restore, protect and enhance ecosystems, they will lower human vulnerability to climate change," said Nathalie Seddon, a University of Oxford zoologist.
Especially in poorer countries, such measures can offer "the only affordable solution to climate change", she told the meeting on boosting resilience to climate pressures ahead of a U.N. summit Monday to accelerate action on global warming.
AFRICA FOREST DEAL
In Indonesia, international organizations and the government are working together to protect eroding coastlines by planting mangroves, said Henk Nieboer, director of Ecoshape, a Dutch foundation that promotes efforts to "build with nature".
Once in place, the mangroves provide jobs by improving fishing and act as a barrier to destructive storm surges, he said.
Ecoshape has carefully monitored the benefits of 14 pilot mangrove restoration projects in Indonesia, providing evidence that has now attracted interest from Thailand, the Philippines, Malaysia and China, he said.
Aiyaz Sayed-Khaiyum, Fiji's attorney general and economic minister, said his Pacific island nation was also planting mangroves to blunt the effects of rising seas, store carbon, protect biodiversity and promote sustainable fisheries.
Restoration projects are possible in many other natural environments, from peat-rich wetlands to grasslands and forests, climate experts said.
Andrew Norton, director of the London-based International Institute for Environment and Development (IIED), said efforts to maintain ecosystems can provide "a stunning range" of benefits, from jobs to absorption of climate-changing gases.
But finding the money to fund that work remains a challenge, not least because putting a financial value on the benefits is hard, and investors have yet to see an obvious pay-back.
Nieboer said attracting capital would require the creation of value for ecosystems through measures like a carbon price to monetize avoided or removed carbon emissions.
That is what is happening in Gabon, which will receive $150 million over 10 years for protecting its carbon-absorbing tropical forests in an agreement announced Sunday - the first such deal for an African country.
Under it, Norway will guarantee payment of at least $10 for each tonne of carbon certified as being stored.
Close to 90% of Gabon's land is covered in natural forests, much in reserves created over a decade ago, but like many Central African nations, it is under pressure to allow forest-felling to bring in cash.
"We have to raise the value of the Gabonese rainforests in order to ensure that conservation and sustainable exploitation can be used as tools to improve the living standards of the Gabonese people," its environment minister said in a statement.
SOCIAL JUSTICE
Backers of such efforts to put a clearer value on forests and other natural systems warn that doing so brings some risks, including that indigenous people and others living on the land could be pushed off as its value rises.
"Nature-based solutions have to work for social justice as well as climate solutions," said Norton of IIED.
Nicky Batang-ay of Tebtebba, the Philippines-based Indigenous Peoples' International Centre for Policy Research and Education, noted that "as indigenous people, we've been doing these nature-based solutions from time immemorial".
Oxford's Seddon, who runs the university's Nature-Based Solutions Initiative, said payments and other incentives should protect and expand natural forests rather than support single-species plantations with fewer natural benefits and far less resilience to climate change.
Natural ways of dealing with climate change have seen a "wave of political momentum" in the build-up to the U.N. climate summit, speakers said on Sunday.
U Ohn Win, Myanmar's minister of environmental conservation, said his country - which is highly vulnerable to extreme weather - was looking to reforest 600,000 hectares (1.5 million acres) over the next 10 years, in part to cut its climate risks.
"Our country has committed to a sustainable development pathway ... with nature-based solutions at its core," he said.
(Reporting by Laurie Goering @lauriegoering; editing by Megan Rowling. Please credit the Thomson Reuters Foundation, the charitable arm of Thomson Reuters, that covers humanitarian news, climate change, resilience, women's rights, trafficking and property rights. Visit http://news.trust.org/climate)
Our Standards: The Thomson Reuters Trust Principles.
No comments: Links to this post

The suicide of an indigenous rights activist protesting against Russia's language policies has highlighted the cultural threats native communities face across the globe as they fight for their land and survival, campaigners and researchers warned.
According to local authorities, a man died last week after setting himself on fire outside the regional parliament in Izhevsk, the capital of the so-called Udmurt Republic in western Russia.

Indigenous groups said the man, whom local media identified as 79-year-old Albert Razin, carried out the act in protest over a recent law that they said favours the study of Russian over native tongues.

Images shared on social media showed Razin holding signs reading "If my language dies tomorrow, then I'm ready to die today" and "Do I have a Fatherland?" as he stood outside the parliament building.

More than 40% of the estimated 6,000 languages spoken around the world are at risk of disappearing, and most of them are indigenous tongues, according to the United Nations.

Sophie Grig, a senior researcher with the British-based indigenous rights group Survival International, said when a language is lost, the entire community that spoke it also risks disappearing.

"(Language) holds the key to the wealth of knowledge a people has about their past, their land, their livelihoods and ways of understanding the world," she told the Thomson Reuters Foundation."When it is lost, the tribe's future is imperilled."

Indigenous knowledge and land rights could be crucial in global efforts to curb global warming, according to a special report by the United Nations' Intergovernmental Panel on Climate Change.
CULTURAL THREATS

The extinction of a community's native languages can also lead to the loss of its claims over the land it occupies, indigenous rights experts say.

And indigenous communities already have a tenuous hold on the land they live and work on.

Up to 2.5 billion people depend on indigenous and community lands, which make up more than half of all land globally, but they legally own just 10%.
Along with fighting for their languages and land, indigenous groups also regularly find themselves defending their culture, language and knowledge against what they see as cultural appropriation by businesses.

Last week, Air New Zealand angered indigenous Maori when it sought to trademark a logo with the phrase "kia ora", which means "good health" and is commonly used to say "hello".

Similarly, Mexican indigenous communities have protested the use of their traditional designs by international fashion labels, while Indians have challenged attempts to patent traditional items such as turmeric and neem.

In Australia, Aboriginal groups are pushing back against public access to heritage sites like mountains and beaches, in an attempt to preserve areas of historical and spiritual importance.
DYING TONGUES

For native communities in Russia, language is one of the main issues of concern, said Rodion Sulyandziga, director of the Russia-based Centre for Support of Indigenous Peoples of the North (CSIPN).

Udmurt, which is one of more than 100 tongues spoken across Russia, is spoken by about 400,000 people, according to UNESCO. And it is listed among the dozens of Russian languages that the U.N. cultural agency says are at risk of disappearing.

"Beyond larger populations, such as the Udmurts, (there) are also many small ethnic groups whose languages and cultures may well cease to exist within a generation," said Neil Clarke, head of the Central Asia programme for Minority Rights Group Europe.

That threat is heightened by legislation passed last year that relegated native languages from compulsory to elective school subjects in regions with more than one official tongue, he added."Current policies are encouraging language loss," said Clarke.

Russian authorities had previously denied the law infringes on indigenous rights, saying it allows children the freedom to decide whether or not they want to learn local languages.

"The law is not aimed at destroying linguistic diversity, but to the contrary, allows people to study their native languages and protects their rights," the government's official newspaper, Rossiyskaya Gazeta, wrote last year.Yet, Razin's death has sparked calls for changes in the law.

"Legislative bodies should immediately review the issue of native languages," said Kadi Khalkechev, head of the Karachay People's Congress, which represents the ethnic-Turkic group mainly based in the North Caucasus, in a statement on the Russian social media platform VKontakte.Sulyandziga of CSIPN said the whole world has a stake in preserving native languages."If we lose one language, we lose something fundamental for the whole of humankind," he said.(Reporting by Umberto Bacchi @UmbertoBacchi, Editing by Jumana Farouky and Zoe Tabary. Please credit the Thomson Reuters Foundation, the charitable arm of Thomson Reuters, that covers humanitarian news, women's and LGBT+ rights, human trafficking, property rights, and climate change. Visit http://news.trust.org)
Our Standards: The Thomson Reuters Trust Principles.
No comments: Links to this post