RightOnCanada.ca | Letter to Harper re international Access to Abortion 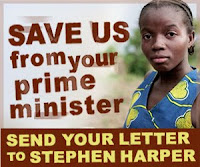 Letter:  Every eight minutes, a woman in a developing country dies from complications caused by an unsafe abortion, often leaving behind motherless children.
In Canada, women have the right to a safe abortion. Now Stephen Harper joins ex-U.S. President George Bush in putting his ideology ahead of women’s lives. At the G8 meeting in Halifax, the Harper government said that international aid should only be given if access to safe abortions is excluded.
Tell PM Harper to stop playing politics with women’s lives. Women have the right to choose for themselves without being sentenced to death.

Feel free to forward this letter to all Humanist Groups who may wish to endorse it - or write their own letter. You can find your Member of Parliament to the Right of this blog