In late January, Amnesty International wrote a letter to Defense Secretary Robert Gates denouncing the conditions of Bradley Manning's detention as "unnecessarily harsh and punitive" and in "breach the USA’s obligations under international standards and treaties." In the wake of the prolonged forced nudity to which Manning is now being subjected, Amnesty has escalated its denunciations: as the Associated Press put it today, the group is now "urging people to complain to the Obama administration about the confinement." 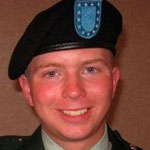 Amnesty International is concerned that the conditions inflicted on Bradley Manning, the soldier accused of leaking information to Wikileaks, are unnecessarily severe and amount to inhumane treatment by the US authorities. Bradley Manning has not been convicted of any offence, but military authorities appear to be using all available means to punish him while in detention. The conditions under which Bradley Manning is held appear to breach the USA’s human rights obligations. Urge the Secretary of Defense to review the conditions under which Bradley Manning is confined and take effective measures to ensure that he is no longer held in 23-hour cellular confinement or subjected to other undue restrictions. Read More »\

Because it's Amnesty International, anyone can sign the letter.     Mary