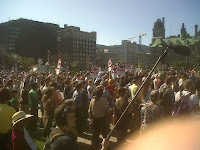 More than 1,000 people are on Parliament Hill this morning to deliver a message to the Harper government - the destruction caused by the tar sands to the First Nations, the climate and water must stop.

More than 180 people - in groupings of 32 waves - are now preparing to soon peacefully cross a police barricade in front of the Centre Block in an attempt to take this message - through a sit-in - to the foyer near the House of Commons.

Council of Canadians chairperson Maude Barlow will be speaking momentarily. Barlow will also be in the first wave of activists to pass over the fence.